I’m always on the lookout for businesses that are doing good things in social media. Every day there are great examples of campaigns that reach thousands (or even millions) and make a huge return on investment simply by leveraging the power of Facebook, Twitter, YouTube, Foursquare and/or countless other social networks.

That’s all well and good, but what I still think most businesses are missing is the true value of social media. They are looking at it as just another marketing channel to add to the mix instead of truly integrating into their business. Social media in its most true form is meant to be interactive, engaging and collaborative. It isn’t meant just to replace a telephone, TV, newspaper or radio.

One company that I have noticed has been doing a brilliant job in really capitalising on the real value and basic premise of social media is Scoot. For those that haven’t heard of this brand, it’s a new low-cost airline operating out of Singapore, owned by Singapore Airlines.

They haven’t even gotten a plane off the ground just yet but throughout their entire setting-up phase they have used social media heavily to build community and keep that community engaged.

Already Scoot has almost 50,000 fans on the Scoot Facebook Page and almost 8,000 on the Scoot Australia Page. That’s pretty impressive for a brand that hasn’t even made one single sale yet. To put it further into perspective, this is about double the amount of Facebook fans that Qantas had when I started with them mid-2011 – a highly recognisable, established airline with millions of customers.

The Scoot YouTube channel has already racked up about 20,000 views and they also have a blog. Interestingly they haven’t yet launched a Twitter account but considering they don’t have customer service enquiries/complaints at this stage I don’t think this is a bad move. It will be interesting to see what they do with Twitter once they do launch the brand, but in the meantime focusing their efforts on Facebook and YouTube seems to be a smart move.

Just having a big community isn’t what is so impressive though. What I really, really love about Scoot is their commitment to collaboration with their (soon-to-be) customers. They have included their Facebook fans in the process of creating their brand – right from the get-go. One of the first things they did was to run a Facebook competition to determine the tagline for their brand. After over 3,000 entries they chose ‘Get outta here!’ as their tag line, which was submitted by two of their Facebook fans. On top of this they are now running a promotion through their social networks to let their fans ‘decide’ their upcoming sale fares by reducing the price every time another person signs up to be a member (free).  So far 17,000 people have done so.

Scoot are also using their social communities to help with recruitment, share relevant tips and trivia about Singapore and Australia, introduce the Scoot team members (individually), share videos and photos and even provide editable holiday greeting cards and videos.

What is Scoot doing right?

1.  Taking advantage of their community. These people are showing interest in their brand so why waste all that market insight by not asking them for their ideas and suggestions? It’s absolutely logical to ask your customers – potential or real – what they want to see/hear/buy from you. 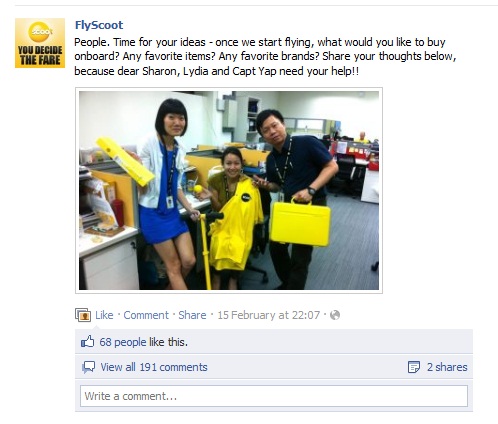 The Scoot team continually ask their community for suggestions 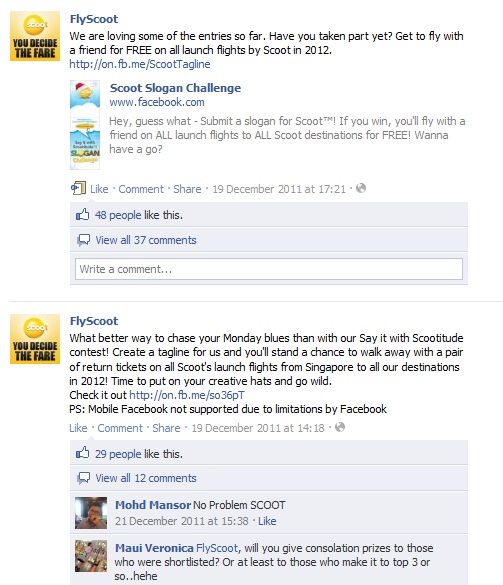 3.  Humanising their brand. Social media is meant to be a humanising channel, which is why we all know not to put too much corporate-speak on there. But these guys are doing an exceptional job by using the right language/tone, asking questions, being a bit quirky and most of all introducing all their team members, complete with zany pics and descriptions of what they do. I particularly loved this post once they reached the milestone of 20,000 fans: To all, as the Head of Commercial at Scoot I’m happy to run down Orchard Rd in swimming trunks and I can also commit to some big prizes etc. in the pipeline for the new year … This is only the start … Steven Greenway

4.  Capitalising on holidays and events. They make a huge effort to post at least one (and mostly more) message about every holiday that is relevant to their community. Christmas, Valentines Day, Chinese New Year, Australia Day.. the list goes on. Not only do they do that but often they provide some sort of trendy customisable greeting card to send to friends – with their branding included of course. 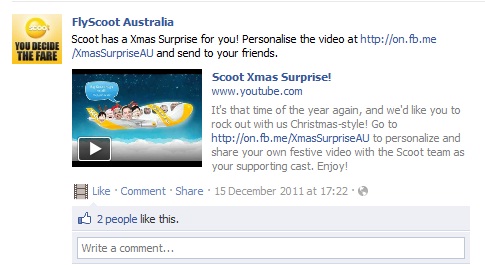 5. Competitions. These guys do so many competitions most of the time they start one before the last one has been finished. It’s not rocket science. People want free stuff. Give it to them.

If you happened to read one of my recent articles: 5 digital trends Australian businesses are missing out on, one of the examples I mentioned was crowdsourcing, and this is effectively what Scoot is doing here. And I love it.

It will be interesting to see how their sales go when they do finally launch their fares, but you can bet the efforts they have gone to to grow and engage their social communities won’t go to waste. I am confident they will enjoy a substantial return on investment for the efforts they’ve put into Facebook, YouTube and their blog so far. And that’s what makes them a brilliant social media case study.

What other brands do you think are doing a great job in social media?