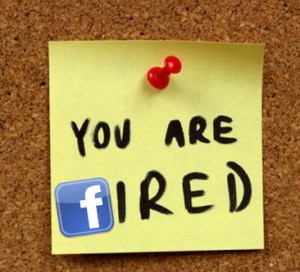 We have probably all heard a story or two about someone who has been fired for doing ridiculously stupid things on Facebook, like calling in sick and then posting drunken photos of themselves in compromising positions onto their feed, being careful to tag themselves freely and maybe even referencing the fact they were meant to be at work.

Stupid. You are all thinking it, and we all agree someone that dumb probably doesn’t have a right to the air we breathe, let alone a job that gives them actual money.

However, you may not be aware that this is only one instance on a broad spectrum of scenarios that could see you getting fired thanks to good old facie-bee. And not all of them require you to be of the less-than-10-braincells variety moron. Some of them may even blow your mind. YES, BLOW YOUR MIND!

So in order to save you from your future unemployment, I’m here to give you a quick run-down of all the things you need to avoid doing on Facebook lest you lose your crappy job (I’m just assuming it’s crappy but it applies even if your job is awesome).

1. First of all, you shouldn’t have your Facebook posts set to ‘public’, because more people (such as your bosses, the creepy guy in IT and the bitchy girl in the next cubicle) can see all the stuff you’re saying. Sadly you can still get fired from posting things if your profile is private, but at least it gives you lower odds. Also, it makes it harder for your professional contacts to find out that you are actually moonlighting as a stripper at nights (explains the fishnets in your top draw though).

2. Avoid shenanigans in work hours and within the workplace. Actually, let me rephrase – avoid posting photos, references to or evidence of shenanigans in work hours or within the workplace. Shenanigans themselves are highly encouraged and can actually be a terrific bonding experience. Just don’t talk about it on Facebook because that shit can get you F-I-R-E-D.Just like these guys from a London hostpital found out when they started planking on hospital helicopter pads. Also, shenanigans. It’s just such a great word.

3. Don’t say anything about your colleagues or boss or workplace on the network either. Unless it’s so utterly ridiculously clearly positive that there is no chance it could be misconstrued as sarcastic, negative or offensive. It turns out that most people don’t like having negative things said about them – not even publicly on Facebook. So if you do this, you may get fired for harassment or bullying or just being a gossip. It makes no difference if your profile is private and you posted said rant during your own time on your own computer. In fact, there have been a number of cases in Australia where decisions to fire staff due to ‘bullying’ posts  were upheld by the courts. So there’s more proof that it can get your arse FIRED. Believe it. 12 Virgin Airlines hostesses realised their mistake after being fired for discussing engine maintenance and cockroach infestations on FB. Nice one.

This one is even more important in Australia, where the right to free speech is not as ingrained as it is in the US – SMH has reported a couple of cases from the last couple of years, when roads worker Alec Armstrong was sacked after commenting on Facebook that the council had too many office staff and not enough workers. Jane Morgan was fired from her job at a construction management company in Sydney in 2009 after she wrote a message on a friend’s Facebook wall saying the company “sucks”.

And let’s not forget this old favourite… 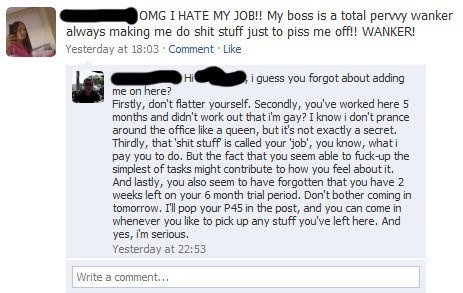 4. Don’t try to be funny, when it relates to your work, your customers or your colleagues. (on Facebook). How many people have been fired for hilarious stories about customers on Facebook? Only about ten billion. I’m pretty sure had I had facebook when I was working in the aisles of Woolworths I would have been fired ten thousand times over. Customers SUCK and so do most of the people you work with, but if you’re going to post funny stories, photos etc you may find yourself out of a job. Take for example this teacher, who landed in hot water for listing “teaching chitlins in the ghetto of Charlotte” in her interests section.

5. Don’t be a creepy paedophile. This applies even more so if you’re in a vocation that involves kids, but I’m pretty sure that your employer won’t appreciate it no matter what. Another teacher found that out after being fired for posting comments like “this is sexy” under his students’ photos. W.T.F?

6. Do not be racist. Or homophobic. Or any other prejudiced term. A youth football coach got dumped after posting on his Facebook wall “I was dining in an Asian buffet today (big surprise), and I heard this morning how Asian students are suppodely so much smarter than American kids. My personal observation is that those fishheads still eat with chopsticks. It took Western ingenuity to invent the fork. I’m just saying. … they ain’t that friggin’ smart.” Neither are you mate, so it would seem.

7. Do not like Facebook Pages that conflict with your company’s values or beliefs. It was recently reported that six US workers were fired just for liking the Facebook Page of their boss’s political opponent after a federal judge ruled that clicking the ‘like’ button is not constitutionally protected speech.

8. Think before you check-in during work time (or when you’ve called in sick). If you’re meant to be in the office, it’s probably smartest not to check into the movies or the brothel down the road. Though social media is establishing the need for us to broadcast to all and sundry what we are doing with every minute of the day, you should probably stop to think if there are people – like your boss (or your partner) who wouldn’t be happy about that particular nugget of information.

9. Do not spend all your work time on Facebook. This has also been known to get people fired in the past. If Facebook is up on your screen every time your boss walks past, it’s not looking good for your company future. Unless, of course, you’re me or any other person who is lucky (and awesome) enough to be paid to work on Facebook.

Sackings thanks to social media are on the rise, particularly within companies with over 1,000 employees. It’s happening all around us and it’s only likely to continue to increase as we spend more and more time on our networks telling more and more people about everything we are doing. Not only is it getting people sacked, but it’s making it harder for them to get jobs in the future as well. I know I’m guilty of a few of these things, and most likely you have found  yourself relating to a bunch of them too. I’m pretty sure one of my Facebook friends (you know who you are… Ryan) is guilty of every single one of them. So all I’m saying is think twice and exercise a bit of caution next time you hit that post button.

If you have any other stories of yourself or others being fired (or disciplined) thanks to Facebook, please share them with the group. I’ll give you a gold star!