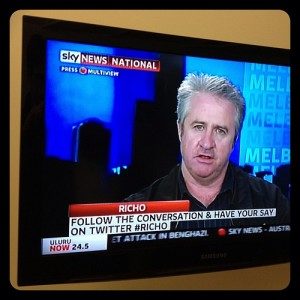 The popularity of social networking hasn’t just affected people — it has transformed what used to be the one-way medium of television. “Social television” is infiltrating households as the television-watching experience becomes more interactive thanks to network initiatives and new technology that marries TV and mobile devices.

Sports media app RUWT?! founder and CEO Mark Philip, citing an interview from Digital Trends, predicted that as technology improves to allow you to use a phone or tablet in place of a remote, the synthesis between television and smartphones will increase. This trend created a “second screen,” which you interact with TV shows through a second digital platform. Here are five ways social media and television are

1.) Twitter is one of the strongest forces in social media, with users generating a billion tweets every five days, according to Statistic Brain. Twitter has also changed the way we watch television. Now, you’re not just watching the election returns — you’re participating in the discussion revolving around Twitter with hashtags like #Election2012. Many TV shows provide hashtags and invitations to “join the conversation,” urging consumers to interact with social media while watching their favorite shows.

Vote for Your Favourite Reality Show Contestant Via Social Media

2.) The partnership between social media and reality television is a natural one. In 2011, “X Factor” launched an initiative allowing viewers to vote via Twitter, Next Web reported. This move allowed viewers to interact with their favourite contestants while giving the “X Factor” valuable information about its viewer base. Expect more reality shows to follow suit.

Networks and Providers Launch Apps to Use While Viewing

3.) Several networks and providers have launched apps to use while viewing their hit television shows. For example, with Bravo’s Zeebox app, viewers receive tidbits while they’re watching and may engage with other viewers instantly on social media using the app.

4.) Social networks are starting to integrate content directly related to television, as well. Facebook is currently testing a new sharing feature that allows users to tell networks what they’re watching directly from Facebook, TechCrunch reported. Using this “TV check-in” feature allows you to proclaim what you’re watching — “Monday Night Football,” perhaps — and see what your friends are viewing, as well.

5.) Advertisers are excited about the possibilities offered by social television. Besides including social channels in a television advertisement, applications such as Shazam allow viewers to receive richer advertisements when they use the app as the ad is playing — some advertisers even tell viewers to “Shazam now” for more information or special deals, instantly expanding the marketing reach of TV ads for viewers with smart devices.

Have you used social media with television? Tell us how in the comments below!