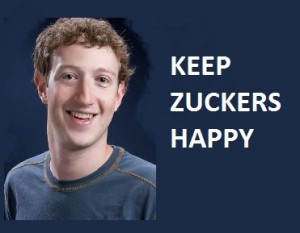 So you’ve read my article about how to get more Facebook fans and you know that you need to run a competition on your Facebook Page so that you can grow your fanbase and people will like you (at least a little bit more). Smashing work! Oh I say sir, you’re on your way to Facebook marketing success.

HOWEVER, the work didn’t stop at your fantastic decision-making ability. You may be thinking you’ll just run some easy competition where people need to post some picture of themselves on your wall posing with your product (preferably nude), then tag themselves and your Page and ten of their friends in order to go in the running to win a $2.52 voucher. It may sound like a great idea, but there are actually a number of issues with this idea – and probably any idea you’re going to come up with – because let’s face it, I’m the only one with the good ideas. The biggest issue, other than the whole premise, is that you would be violating Facebook’s T+Cs and in doing so jeopardising not just your competition, but your page itself!

However once again I’ve taken the time to put together a nice handy step by step to-do-list of how to put together your Facebook competition so that you can actually be successful, at least somewhat like me. AND make sure your Page/competition isn’t shut down for ignorance (which actually is the fault of Facebook being completely incompetent at communications) Hurrah!

How to run a Facebook competition in 8 handy steps:

1. Establish your objectives. Why do you want to run the competition? How is the competition going to achieve your objectives? Don’t just run a Facebook competition because that’s what everyone else is doing. You need to understand what you’re trying to actually achieve in order to figure out what your competition should look like, who it will target and everything else. So are you doing it to grow your community, or to engage your current fanbase or do you want to increase awareness about a new product? Or something else?

2. Scope out the competition. What is the prize? What is the entry mechanism? Don’t make it too hard. If they need to travel to five exotic locations in the Universe and take a 24 minute video of themselves at each location holding a different coloured fruit in each one while dancing on their head, you probably won’t get many entries. The same goes for any video entries. Or anything complicated at all. Even having to write too much stuff or think too hard is going to impact on your volume of entries. Unless your prize is something ridiculously amazing, like an intergalactic space station or a pair of Johnny Depp’s used underwear. Then you can ask people to do whatever you like and they’ll probably at least consider it.

You also need to be aware of relevant licensing issues. For example in most states of Australia you cannot run a random draw competition without applying to each state authority for a LTPS permit. Which not only is time consuming and annoying (who likes paperwork or dealing with Government) but also costs money.  You can get around this by making your competition a ‘game of skill’ which means you will be judging the entries, which means you have to get people to submit some sort of creative content. If you want your competition to extend globally (after all Facebook is a global platform) you will most likely be breaking a rule somewhere in some country, but my view is that as long as you’re satisfying the rules in your own country, who really cares. Nobody has the time to know the laws about promotions and competitions in every damn country in the world, so I’m giving you the right to forgo any arduous research into any of it beyond your own country, unless you work for a multinational company, in which case your legal team are probably going to say no to anything you want to do. Ever.

You will also need to put together some terms and conditions and link to this within your competition, because people need to be able to see the fine print of your competition. The best way to do this is go to some corporate Page that is running a Facebook competition, click on their little T+Cs link and basically repurpose it all to suit you. Stealing is way better than having to use your brain, in my opinion. And I know best.

3.. Work out your promotion plan – how will you get entries? Aside from your current fans, is it worth running a Facebook ad campaign? What about an EDM to your current customers/members? Is the competition prize strong enough to encourage viral sharing? If you have 10 fans and no budget to do any other promotion, you may as well forget your competition now. Contrary to popular belief, having a prize that is worth anything less than about $10,000 is not going to give you instant viral success. You are going to have to work for that.

4. MOST IMPORTANT: How will the competition actually run on Facebook? What does the user experience look like? Does it comply with Facebook T+Cs? There are a lot of rules for running Facebook competitions and promotions – for example you cannot run one on your wall. You cannot require people to tag themselves in a photo or post something to your wall or like a status or post a photo on your wall to be eligble to win. You cannot make the entry mechanism just liking your Page – though you can force people to like your Page before being able to enter. You really need to make sure you’re adhering to Facebook’s fairly stringent T+Cs before going through with your competition, because if they catch you doing something naughty Zuckers may just decide to shut down your page with no warning or chance for redemption.

This is particularly important if you have not yet spent millions of dollars on advertising on the Facebook platform. If you have, you may be able to convince Zuckers to reinstate your page if you agree that your lesson has been learnt. However if you’re just a normal punter who hasn’t funded his latest yacht, private island or at least brand new maserati, you’re probably going to be out of luck.

5. Build your Facebook competition application. This doesn’t have to be as tricky as it sounds. You don’t need to find a developer and pay them millions of dollars. There are a few ways to build Facebook tabs, and one of the easiest is using a tool like Shortstack – in fact in the interests of cross-promotion I have written an article in the past about creating Facebook tabs using a tool like this. Alternatively you can get your normal web person to build an html application on your site that adheres to Facebook app specs (ie. is no more than 810px wide) and pull it in via an iframe tool (which is a free option, not counting the money you pay the web dude). Or you can feel free to contact me and I’ll get your competition app designed and implemented with little stress and a lot of awesomeness.

6. Put together a privacy policy. This one is like a bit optional unless Facebook catches you out. Typically you’re meant to have some sort of Facebook Privacy policy hosted online somewhere, that indicates to people what you will be doing with their private data once you collect it through your competition application. So probably you’re not going to use it for anything other than judging the competition but if you’re planning on selling it to a Nigerian Prince (ie. spammer) or using it as a personal dating service – well you’ll need to include that in there. Whoever puts your application together in Facebook will need the URL of this privacy policy to put in the app, otherwise Facebook might just send a bit of a threatening email telling you they will tear your application to pieces unless you do this. Sometimes. Other times they just don’t care what you do. That’s Zuckers for you.

7. Run the competition, get billions of entries and become famous for being ridiculously awesome at Facebook (and keeping Zuckers happy).

8. Name me the winner of your competition, even if I never entered. It’s the least you could do after I made it all possible.

So that’s the short of it. If you want the long of it, or any more help or information, feel free to get in touch with the world’s best and brightest and most awesome social media expert. (me).

8 facts to supercharge your email campaigns