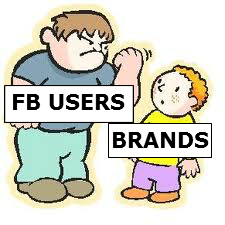 Every second day there’s some article covering the new downfall of Facebook – some new feature (usually related to advertising or some other money-grabbing feature) that will lead to a mass exodus of everyone’s favourite (or at least most-used) social network. I’ve never really subscribed to any of it before. I tolerate Facebook’s constant changing and tweaking, the never-ending addition of advertising formats and even re-designs of my profile page with fairly limited whingeing.

Until now.  Now I’m about to initiate an all-out whingeing war on the site I spend more of my online time than any other. Now I’m pissed. And don’t get me wrong – it’s not entirely Facebook’s fault. It’s the fault of the users. People like you and me. Maybe even actually you. My facebook friends. They bear more responsibility than Zuckers, despite the fact he and the FB team ultimately allowed my user experience to be ruined.

Viral Facebook posts in my newsfeed. It started off with some bullshit posts about saving some child in Africa or some other crap that collected tens or hundreds of thousands of likes and a few billion comments of people asking me to subscribe to their profile. NO THANK YOU. You see, this was extremely annoying, but luckily for me I have a fairly limited amount of Facebook friends who were willing to be sucked in by capitalistic love-jobs hoping for a few minutes of fame. I dodged a bullet there – or so I thought.

These ridiculous viral posts seem to have dwindled (at least on my newsfeed) for the time being, but what they have been replaced with is something equally as annoying. Viral brand bullying posts. Somebody had a bad meal at McDonald’s, someone else is sick of banks being crap at customer service, another person is angry that they can’t sit next to a child on a Qantas flight. Do I look like I give a shit? No, thank you very much, I don’t. Who hasn’t had a shit meal at McDonald’s? It’s FAST FOOD for crying out loud. We already know banks are all scum-sucking money-hungry dickheads. And as for sitting next to a child on a Qantas flight – I’d PAY not to have to do that, so quite frankly you can get over yourself. 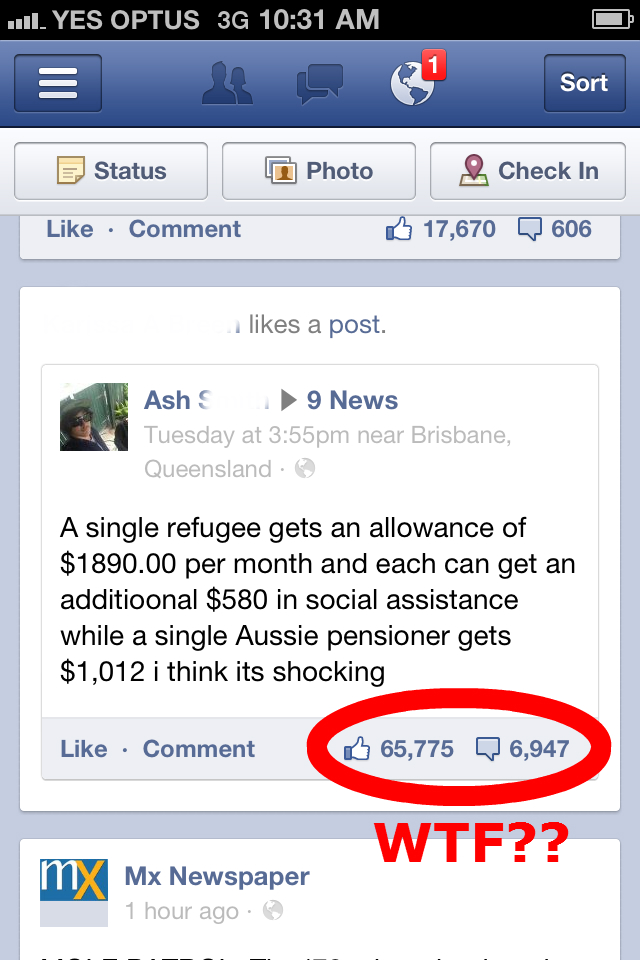 Take for example, this post that showed up in my mobile newsfeed. This person cannot even spell. I don’t know them, I don’t ‘like’ 9 News on Facebook and yet this garbage gets 65,000 likes and infiltrates my newsfeed. WTF?!

Is it wrong to post angry rants on business Facebook Pages? No. I’m not saying that. I think we all deserve to have a good whinge about crappy customer service or policies when we’ve been affected by it, and let’s be honest – it’s much easier to post to a Facebook Page than write a letter, email or make a phone call. That’s fine. So probably I shouldn’t be blaming the actual post-writers in this scenario. It’s the 65,000 people that see fit to ‘like’ these mundane, dime a dozen posts that pisses me off. I don’t care about their friend’s shit customer service experiences, because here’s a memo: I’ve got my own. I don’t want my Facebook newsfeed littered with others’ first world problems. I’VE GOT MY OWN.

When I check my Facebook newsfeed (all 3,000 times a day) I want to stalk the shit out of my friends to see what is going on in their lives, and make sure mine is at least 492 times better. It’s like a 30 second coffee catch up with dozens of people at once – minus the calories, and the really long-winded boring stories about their pets (hypocrisy intended). I like it. It’s cathartic, and it takes my mind off the things I should be doing, like working. Or watching the road. Happy days. Until now, when I instead am faced with these viral posts telling me that some person I don’t know is angry with some company I don’t care about for some reason that sounds pretty fucking lame to me. Why does that person get tens of thousands of likes? And why does Facebook then see fit to put that ‘story’ on my newsfeed, when I neither know the person who posted it nor do I ‘like’ the Page it was posted on. WHY ZUCKERS??? This is where Facebook needs to step in and take some responsibility. This is like reverse advertising. It still sucks that it’s forced on me, but this time it sucks for the brands involved even more. So who exactly is winning?

I’m all for people power and yes, it seems that this is a way we can stick it to these big brands so they can see they can’t hide anymore, but at this point it’s getting a bit over the top. Unless we want to delve through 100,000 comments on the post, we can’t even see what response the Page has given. They are effectively muted on the issue, with no avenue for defense. It seems like bullying to me. I believe in telling a business when they’ve done the wrong thing, but I also believe in their right to a response. If you take that away from them and then expose that same complaint to hundreds of thousands of people, that’s just unfair.

I can tell you from experience when I was responding to people’s posts on the Qantas Facebook Page that normal negative posts (that no one had ‘liked’) could get you down. I used to suffer from Post-Post Rant Depression when people submitted their rants on the wall. I can’t even begin to imagine the PR crisis that happens in these new times of thousands of people joining in so that you are not able to even get your response out there.

And that’s what is ruining my Facebook experience. Seriously people stop liking these posts unless they are something EXTREMELY IMPORTANT AND/OR FUNNY.  And if anyone has a direct line to Zuckers, please tell him to stop showing this shit on my newsfeed and go back to pictures of babies and cats and coffees (and who thought anyone would ever say that).

Hey! My name is Cara Pring and this is The Social Skinny. If you don’t get the name, read the story here. You’ll find all the latest social media news as well as tips to help your business social strategy – without technical jargon, fluff pieces, useless statistics or ads. You can read a bit more about me in the About page or you can connect with me on Twitter, FB, LinkedIn & G+. Thanks for stopping by 🙂 Follow @carapring

Can you measure social media ROI?

The #ClickFrenzy case study: How not to do social media