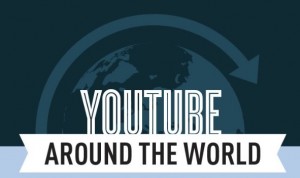 The world’s most avid YouTube users are from Saudi Arabia, where television programming is extremely controlled by the government, so the youth turn to YouTube for entertainment. Saudi Arabians contribute more than 90 million YouTube views each day!

This one is a bit surprising, because 61.5% of videos are actually blocked in Germany and YouTube had to install special filters to prevent users from uploading some music videos. Even so, German YouTube channels YTITTY, Gronkh, and Kontor TV each have over 2.5 million subscribers!

Finally, Japan has 5.59 million users active on YouTube. This is not much of a surprise, because 78.4% of Japanese people use the Internet, and 46.9% of them are active on YouTube. One of the most popular videos for Japanese YouTube viewers is the Matrix-style martial arts dance performance by Kenichi Ebina.

So there you have it, Youtube is one of the most popular sites worldwide. Pretty cool. Here’s the infographic:

Eating Well in the Age of Social Media