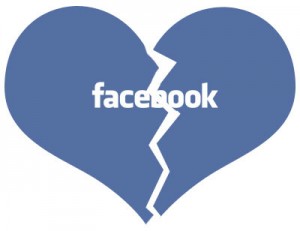 How many times have you heard someone confess how much they love Facebook? How many times have you said it yourself? Most of us are guilty of these words, despite the fact that when it comes down to it, we really don’t love Facebook at all. And don’t worry, this article is not just another anti-Facebook rant about how it’s replacing real human interaction and making us all anti-social web robots doomed for years of sexual frustration and a persistent need to make our lives seem way, way more exciting than they really are. Even though, generally, that is all correct.

That is because this article is not about Facebook the online social network – the tool that you use (probably daily) to connect with your friends, family and stalkers alike. It’s about Facebook the brand. The actual company behind this beloved online network. You know, the one with that young fella Zuckerberg at the helm. You see you can love a product or service a company provides but not love them. I mean I love money – and the fact I don’t have to stash it in my mattress and can withdraw it at the click of a button to buy a pretty dress – yet I sure as hell don’t love my bank (who does?). I like food, but after working for Woolies for seven years when I was younger I can safely say they rank alongside Hitler and the SS in terms of the degree of endearment I feel for them.

When you really think about it, how much emotional attachment do you have with the Facebook brand? Do you have any amazing examples of Facebook customer service or brilliant communications? Have they ever made you feel special, aside from facilitating 10 people to like your latest update? The answer, I’m predicting, is no. Facebook might provide you with one of the most important platforms for communication and engagement ever, yet when it comes to giving a shit about their ‘customers’ let’s be honest – they don’t. Well, aside from caring that a good percentage of us are clicking those little ads that keep multiplying quicker than paparrazzi when Britney or Lindsay are out on the town.

Facebook just don’t care about you. Or me. And I’ve spent a good few thousand on advertising in the past. And yet, even if you’re spending thousands, you are dreaming if you think you’ll get even a minimum level of customer service. Don’t bother emailing them – and don’t even bother looking for a phone number. If you’re not spending at least $20k you’re considered to be lower than the guy who collects the sanitary disposal units at their HQ (nb. an unfair analogy as that is a very respectable and important job).

And as for you poor chums who don’t even spend a cent on advertising, well – you’d sooner win a marathon with both legs tied to your nose (yep, came up with that one all by myself) than receive even a modicum of ‘customer service’ from them. They don’t want to hear from you, they won’t respond, they’ll shut down your account at the slightest provocation and won’t care to listen to your defense. They’ll change your feed, your posts, your timeline, your photo viewer, your privacy settings and everything else with no notice, no explanation and no desire to hear what you think. They’ll add another 3 million ad impressions to your navigation without blinking an eye. And don’t expect they’ll bother notifying you about any of it either. They won’t.

And if you have a business Page, they’ll change your insights so that there’s hardly anything useful other than a big fat encouragement to spend more advertising dollars. Then they won’t approve half your ads when you do spend more, even though there’s no difference other than a colour in your logo to the other half that got approved. They won’t give you proper statistics or analytics around who is clicking on your ad, and they’ll stop serving it altogether if it’s not making as much money as your competition. And since Timeline came in they won’t even let you have a landing page, or any call to action in your cover image.

Now, all of that sounds a bit bitter, so let me just /end rant and say – can we really blame them? Facebook have to be one of the worst brands I’ve ever dealt with or even heard of in terms of communicating to users and providing even a basic level of customer service. Yet – how many times have you heard people say “that’s it, I’m quitting Facebook because they have the worst customer service”? Probably zero because we all square our chins, complain about the changes, hate Facebook (the brand) and continue to spend half our day posting, liking, commenting and stalking.

Which begs the question: if you had that much of a monopoly over your user-base, if you absolutely knew you had them all eating out of your digital hand, would you bother with the time, effort and money to care? Or would you just keep churning out advertising and making the big bucks, without giving a toss about the user experience of those who are effectively buying your Maseratis and mansions?

Honestly I’d like to think I would care. I’d like to believe I’d at the least put some effort into communicating changes and responding to legitimate issues. I’d like to believe if I was at the helm of such a universally famous and rich company I’d make an effort to acknowledge and care about the people who made it that way. But who knows? We all bitch about Facebook for these reasons, yet none of us have deleted our accounts, and probably  none of us will.

So the moral to the story is: Facebook (the brand) sucks, but get used to it because they aren’t going to change and you’re still going to be posting your latest holiday pics in 10 years from now.

And that’s all I have to say about that.