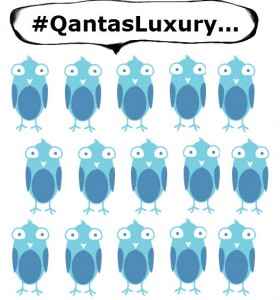 Before I say anything in this article I need to disclose that I work for Qantas in their social media team (opinions are my own and not necessarily reflective of the company). That being said, I only just returned from a month in the South American wilderness of the Inca Trail, Amazon and Galapagos Islands. Returning to reality after a month in exotic locations is hard enough without walking back into some PR mess regarding a relatively innocent tweet gone viral. I had absolutely nothing to do with this particular Twitter competition, but I’m not going to get into any analysis regarding whether it was the right or wrong strategy. I tend to think hindsight is a luxury that will influence your thinking no matter how much you may believe otherwise.

Regardless of whether I would have sanctioned this particular competition, what I will say is that the apparent reaction by various media and self-appointed social media ‘experts’ and ‘commentators’ is nothing short of ridiculous. The way that people seem to be carrying on about a tiny little competition to give away some pyjamas makes it seem like Qantas went out and asked people to suggest in 25 words or less how they should massacre 10,000 Haitian babies rather than describe a simple luxury in flight experience.

I know you are all gathering your digital pitchforks ready to hurl accusations of bias in my direction, but the truth is, I’m sick of this all-too-frequent practice of lambasting corporates for every tiny social media initiative they instigate. This is just one extreme example of that, and even as I sat in a little internet café and read a handful of online articles that had been sent to me as I enjoyed my only hour of Internet access in the Galapagos, I had to roll my eyes at the ridiculousness of the story. At that stage I assumed it was limited to a few marketing publications and a news outlet that was having a very slow news day. To return home and find out this was covered by just about every major newspaper, tv channel and radio station – not to mention making front page news in other countries – had me utterly stunned.

What, exactly, makes this competition the world’s greatest social media fail? The fact that it elicited a few thousand tweets that were less than complimentary? I’m sorry, but anyone who actually knows anything about managing social media for large businesses knows that it aint always peaches and cream. If we ran screaming from social media every time we received a bunch of negative feedback, we may as well shut down all channels now. Receiving tweets that are negative about your brand doesn’t make your social media strategy a failure – it merely indicates that people are not happy about your brand. In this case it was less about the competition itself, and more about the dissatisfaction about recent events surrounding Qantas. Social media was the chosen conduit for this dissatisfaction, not the cause.

Qantas attracts thousands of mentions every week. Want to take a guess at how many are negative, even in normal BAU times pre-grounding and union problems? The answer is plenty. Anyone who actually has the slightest idea about Twitter knows that it is #1 popular channel for complaints, gripes and feedback. If a business is active in the channel, it really is the easiest way to convey any problems, issues or suggestions you have. And you know what? Despite hundreds of negative tweets every week since the inception of the social media strategy at Qantas I have yet to consider that our strategy is a failure. In contrast, it actually helps make the strategy a success, because the insights we glean from these tweets help us improve the business. Social media is taken seriously here, and the weekly reports about social activity and trends are eagerly received and discussed across many business departments.

Last time I checked social media was about engagement, community and insight. In terms of these three aspects, it is hard to label the competition as a fail. The engagement was there, the community grew, and it led to a bucketload of insight. People weren’t happy with the brand. Not surprisingly, there were still more than a few people who were a little put out that the entire Qantas fleet had been grounded for a couple of days with basically no notice. Understandable. The question is, is it really the best social media strategy for companies to avoid any activity if there is negative sentiment surrounding the brand? I don’t think so. Would the Qantas social media strategy have been applauded if we sat back for the next year and did absolutely nothing because some people don’t like us anymore? I doubt it.

Granted, if the company knew this reaction would take place they probably would have chosen to delay the PJs give-away and stick to just the traditional response. But hindsight, as I have already indicated, is a luxury. What most of the pundits, blithely rambling about ‘poor timing’ and ‘poor judgement’ may not realise – due to their inability to do even the most basic level of research – is that this wasn’t the first such  competition that had been run since the grounding of the fleet. Yet, somehow, in what can only be described as an absolute miracle, no articles, tv shows or radio commentaries were seen or heard about how these other competitions were the worst thing to happen to social media since Klout was launched. Apparently, though these competitions were essentially the same format, with similar prizes and the same timing (or worse, if you consider that they were implemented even closer to the grounding), they escaped the ‘fail’ tag. Why? Simply because chance did not see a few of the twitterati piggyback on any of these hashtags for some quick social kudos and a few laughs.

I know what you are all thinking. How could it not be considered a fail when there were thousands of tweets (predominantly negative) using the hashtag, so much so that it was trending worldwide? Here’s why.

Speaking of insights, it’s time to discuss some favourite ‘insights’ provided by the never-ending stream of over-commentating on the campaign:

Was this competition an ingenius social media strategy? No. It was a non-descript competition to give away a fairly innocuous prize. The premise of the competition wasn’t stellar and the hashtag could probably have been chosen better. But it was part of a wider, very scientific and complex strategy of ‘engagement’. (please note the sarcasm in previous statement). People like free stuff. We have free stuff. Go figure. We’d done it a thousand times before, and if management get over this little debacle, we’ll probably do it a thousand times again. It wasn’t meant to be social media campaign of the year, nor was it designed to attract a billion new followers. It was just a small, run of the mill, standard twitter comp that was meant to make a few people happy by getting some high-class QF merchandise.

Perhaps it was unfortunate that a few people saw fit to hijack the hashtag to let rip their negative opinions about the brand – which saw a whole lot of spammers, trolls, sheep and ‘commentators’ follow suit – but that doesn’t make the initial strategy flawed. No one can predict when the social media sphere will jump on something because sometimes it just takes one person and one well-phrased tweet to start them off. Odds are that if it wasn’t this competition it would be the next, or the one after that, or the one after that

When people are unhappy with your brand, you’re going to hear about it through every comms channel you have. Social media just happens to be the most public one. Does that mean you run and hide away in the dark depths of social media obscurity until some day in the unforeseeable future when everyone loves you again? Or does it mean you sit up, man up, continue with your strategy and face the music when the melody of negativity comes your way? For mine I will always choose the latter, because safety is not what social media is about nor do I believe in attempting to receive only positive feedback. If people are unhappy about your brand, then it is best to elicit that feedback to be fed back to the business so that improvements can be made.

The sad thing is that every time a business gets publicly castigated for a seemingly innocent social media strategy, management crawl even further into their anti-social media caves. Eventually the risk involved becomes too great and nothing can be done through these channels without the approval of twenty managers and the legal team, which will inevitably lead to completely boring (but safe), diluted campaigns – or nothing at all. It’s little wonder that corporates are so much further behind where they should be in this sphere. All thanks to countless social media ‘experts’ who would be better off focusing on implementing their own social media campaigns instead of constantly criticising everyone else’s.

How many articles would have been written about this particular competition had those first couple of people never tweeted their witty retorts? If it had have sailed through uneventful like the last twenty? The answer is none. Only with the benefit of hindsight was the ‘fail’ label slapped on by all and sundry with little real thought or consideration.. Yet the real social media  strategic fail would have been to hide away in a cave of ignorance,  successfully avoiding any controversy or negative feedback by doing nothing at all.

At least, that’s the opinion of this social media ‘expert’.