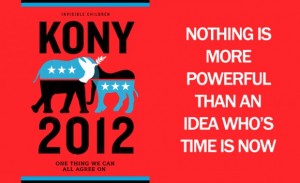 If you’ve been on the Internet, read a newspaper, watched some sort of current affairs show or spoken to someone in the past couple of days, the chances are you’ve heard of KONY. Whether you’ve taken the required 30 minutes to watch the Project Kony 2012 video (scroll down to view) that has been shared no less than 2.24 billion times on your Facebook feed or under the #stopkony hashtag on your Twitter feed– you’ve probably heard the name.

If you’re still not sure what the fuss is about, Kony 2012 is a video that was created and shared by the group Invisible Children, which (in a very long-winded and emotionally investing way) depicts the story of Joseph Kony, a Ugandan warlord who has forcefully recruited over 30,000 African children into his command over the past 20 years, forcing them to carry out atrocities and in some cases even murder their own parents.

Along with the education piece comes a very emotional, persuasive and inspiring plea for everyone across the world to get involved with this Project Kony 2012 to “make Kony famous”, which will (apparently) help us to capture him and bring him to justice. Just whether or not millions of people being able to recognise someone who is hiding out millions of miles from where we all are will really lead us to his capture is debatable (how long did it take to find Bin Laden?), however bringing attention to this distressing situation that has been largely ignored for decades has to be applauded, regardless of ulterior motives that some are suggesting Invisible Children may have.

The importance (and power) of social media in Kony 2012

Why has it taken 20 years for the situation in Uganda and other affected African nations to be brought into the forefront in the minds of Westerners? Why now? The simple answer is social media. There have been newspaper articles, TV reports and even movies made about the dire situation in these nations – but the fact is that the power of these channels cannot come close to the power and influence of social media. Hundreds of thousands of people may read an article in TIME magazine, but over 850 million people have Facebook. And these people are more invested and influenced by what their friends are sharing than what some faceless journalist deems important.

If one person shares a video on Facebook, a moderate percentage of their friends will probably take note of it – even if they don’t watch it. If two people share that same video, a pretty high percentage are probably going to take notice. If more than two of your Facebook friends share a video, the chances are you’re going to watch it. You want to stay in the loop and know what is gaining the attention of your friends. In the last 12 hours no less than 10 of my Facebook friends have shared this video – and more have posted some sort of status about it. And don’t even get me started with Twitter. I haven’t checked my Pinterest or Google+ feeds but I’m willing to bet they’ve been infiltrated by Kony 2012 as well. And that’s the power of social media. This is what we mean when we talk about things going ‘viral’.

So is the power of social media a good or a bad thing? 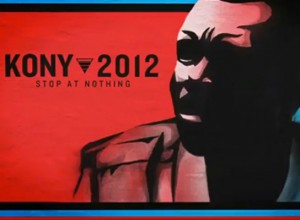 When these sorts of situations come into the limelight thanks to social networks, everyone starts celebrating the positive power of social media and how the ‘little guys’ now have the power to be heard, discovered and even made famous. Change can be forced if enough people get on board – and now all of a sudden they have the required tools at their disposal to facilitate this.

But is the power of social media always a good thing? The existence of Justin Bieber suggests not.  Not to mention the riots in London and Cronulla.  Social media has the power to spread a message faster and more effectively than any other medium, but the influence this message may have must also be considered. In the case of Kony 2012, how many of the millions who have watched that video so far ate up the emotional material and strong imagery included without questioning any part of it? How many people saw their friends and family getting involved and immediately wanted to be part of that community? How many just wanted to get involved with wallpapering their city in propaganda under the banner of ‘a good cause’?  I’m willing to bet that more than 90% of those people who clicked ‘share’ didn’t look for any other commentary on the situation or even on Kony himself.

The sad truth is that most of us already know that some pretty evil shit is going down in African nations, and yet it takes a video with a cute American kid, a killer soundtrack a slightly anarchist appeal to get a response. What this proves is that the power of social media lies more in its ability to influence your thinking – through tools like the mob mentality, more so than spreading awareness about an issue, event or person. If this had have been a straight article – sans all the inspiration and imagery – nobody would be sharing it, despite the fact the crux of the issue (Kony=evil) would still be depicted. And if the end game had have been a simple donation – not a trendy bracelet and the permission to wreak havoc in the streets on one night in April – how many people would have gotten involved then? School kids across the globe have set up countless Facebook events inviting millions to the Kony event in their city, and yet it seems a little hard to believe they would be so enthusiastic if the event was a pure fundraiser rather than an invitation to cover sidewalks, buildings and infrastructure in red signage. As one guy asked in one of the fifty Kony 2012 Facebook events I was invited to, “who will clean all of it up?” Who indeed. You can bet it won’t be Kony. Nor Invisible Children.

And therein lies the danger of social media too. Humanity – and especially the younger, more mobile and influential generations – are impressionable. They succumb to mob mentality. They desire community. We all want to belong. We want to be inspired. We want to believe. And we sure as hell like jumping on bandwagons. So far social media has proven its positive power on numerous occasions – by forcing government reforms, encouraging businesses to do the right thing by the environment, reuniting loved ones, capturing criminals and in this case spreading the world about a despicable man carrying out unimaginable evil.

But we need to seriously consider the implications this power could have. What if the power to make impressive, emotive and inspirational videos falls into the wrong hands? What if it already has? Is the encouragement of millions of people to effectively vandalise cities and towns around the world on one night in April 2012 an effective strategy to bring one evil African man to justice? Or is it just one step away from anarchy? Is it dangerous to be teaching our kids how to inspire revolutions through the use of the right script, background music and images?

The power of social media and all the good things it has thus far achieved should be celebrated. But it is also something that can be abused. And that’s something none of us should forget.

Current Kony 2012 video statistics as at 9/3/12 10am AEST (on official Invisible Children channels):