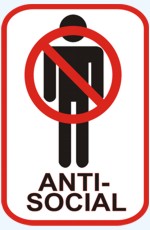 We can all remember countless times where we’ve been sitting happily at home, laptops safely ensconced in lap, coke and m&ms beside us chatting with a few friends on facie-bee, stalking the ex and feeding some of our farm animals when all of a sudden our digital bliss is rudely interrupted by a phone call from a mate inviting us to a BBQ that night.  “Sorry mate,” we diplomatically decline “I’m already busy.”  Jesus, we think, who needs a BBQ when we’ve got our Facebook life to live?

Probably 85% of you are re-reading that paragraph mustering up an appropriate amount of incredulity at the suggestion you would ever decline a BBQ invite in favour of a few extra hours sowing some seeds or milking the cows or whatever the frig you even do on Farmville.

So why, then, do people still maintain that facebook makes us less social? Personally I suspect these people have never used facebook and are trying desperately to justify their social networking inferiority.  They have come too far in their little self-perceived digital independence game and are thoroughly hooked on the constant attention they receive as the very last new media non-conformists. They think they’re special.

But are they really more social?

There are arguments for both sides, but the main thing to note is that the arguments supporting the theory that facebook makes us less social are stupid and wrong.

I could list a thousand reasons why it is not the case, and support it with a lot of pretty important-looking statistics.  But all I really need to do prove our social superiority is to explain the key purpose of facebook (also I don’t really have any statistics).  It’s entirely understandable that facebook virgins would be largely oblivious to the great self-promotional marketing machine that it is, but let me give you a quick education.  Basically the rules are as follows:

1.       You must do everything in your power to make your life appear better than everyone else’s

That’s really about it – your mission, should you choose to join facebook, is to prove to everyone else that you are awesome and they should want to be you. This is probably why recent studies have shown that facebook is making people sad, through social networking jealousy.

In order to accomplish this great jealousy-invoking feat, you need to actually do things. Nobody is going to be jealous of a status update about how many hours you’ve just spent looking after your digital farm.  And yes you could probably lie about these envy-aspiring activities, but in the world of facebook you really need to prove yourself to gain real cred. Preferably through alcohol-fuelled photos and frequent check-ins to local hotspots.

So in reality, facebook is probably making you more social, because you sure as hell aint getting any popularity kudos for sitting on the couch all weekend poking people and changing your profile pic.

And if that’s not proof enough for the face-haters out there, I’ve got one more item in my argument arsenal, and that is the simple fact that humans, with or without facebook, are socially pretty hopeless.  We only seem to have the capacity to keep in touch with a certain number of people at any one time.

I’m not exactly sure, but I think it might be about 16.52. Except if you’re in a relationship, when this gets reduced to something like 3.4.

Beyond that, we just spread ourselves too thin and start forgetting what stories we’ve told what people and whose secrets were meant to be kept from who. It’s all just too hard.  As a result, inevitably through the ages (cases have been recorded as far back as 168AD, where Jesus got in heaps of trouble from Mary for telling Moses her suspicions about what Noah was up to with the gibbons) human beings have lost touch with those they genuinely cared about.  Not quite enough for them to be within the 16.52 circle of trust, but still some folks that they liked well enough to want to keep on the radar.

But herein lies the problem of BF (before facebook) – for every year that goes by that you don’t have contact with a person, it gets exponentially harder (and more awkward) to get back in touch (see pictorial display below). 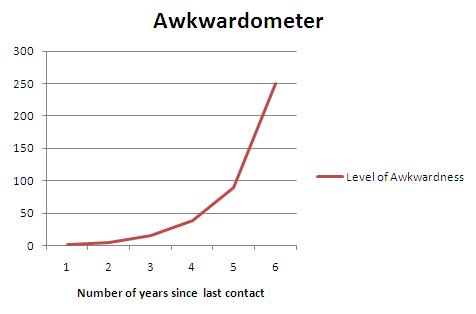 Similarly, if you happen to run into them unplanned, it registers as a code 5 on the weird-ometer. That is, of course, unless you feel as if you’ve been having virtual catch-up coffees on a weekly basis in the form of your facebook feed. If you know all about their sister’s wedding, the dress-up party they went to on the weekend and their ‘complicated’ relationship status, nothing is all that weird. You haven’t really been out of touch at all. A comment here and a like there and you’re still buddies – suddenly your circle of trust has expanded to something like 75.2. And you’re much more likely to catch up with them in the real, human world later on down the track because you never really lost touch.

So is the ‘facebook makes us antisocial’ hysteria justified? Not by a long shot.  I suspect it has been brought about by anti-facebookers trying to justify their continued abstinence from the world’s greatest social machine (like my good friend ‘real life’ who recently released a tirade within mx in response to my ‘how to deal with an anti-facebook friend’ article, accusing me of having no life while he was out going to restaurants, playing sport and catching up with people in the ‘real world’.  Utterly preposterous I know – that night I showed him by grabbing some quality maccas, where I had a quick catch-up FACE TO FACE with the 15 year old serving me and then later worked up a sweat playing with my cat). 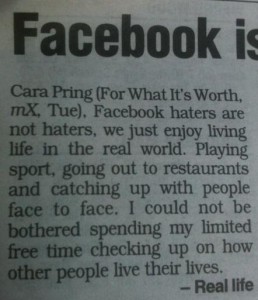 What do you think? Does facebook make you more or less social?