In October last year Facebook released a new version of groups which was actually pretty damn cool but still seems to be pretty underutilised.  I have yet to use this feature, which to be quite honest is making me feel like a pretty shitty social media specialist.  To try and make up for this saddening fact I thought maybe I should write an article about it…. that way people may still see me as an expert, I will feel less like a failure and I will hopefully retain my job. Also you guys will be much more in the know and maybe I will be celebrated as starting a great groups phenomenon. Zuckers will then be sure to hit me up (let’s face it it’s way overdue) and I will be awarded as some sort of facebook evangelist trend-setter. Or something.

The new facebook groups are similar to the old groups, but just with a bunch of (arguably) cooler functions.  Groups enable you to share information with a smaller subset of your friends, family, teammates, colleagues or fellow interest group members rather than your entire friends list.

After creating your ‘group’ you can add anyone who is your friend on facebook without their permission.  You can then start sharing photos, videos, documents and posts with the people in your group.  You can also chat to everyone at the same time in group chat (rather than the standard one-to-one chat function of facebook) and even set up a group email address.

Apparently they have proved extremely popular, with over 50 million groups in circulation (according to the facebook blog) and – surprise surprise –  Zuckers and his team just recently revamped the service to add some even more exciting features.  These include the ability to upload an entire picture album, the ability to post questions and polls that only members can respond to and the facility for the group owner to approve people before adding them to the group.  The recent new ‘Send’ button (soon to be discussed in my next update post) also applies to groups.

Since the launch of ‘new’ groups last October, you are unable to create any of groups in the old format.  So just deal with it! 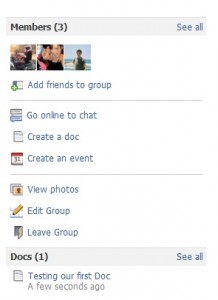 You might be wondering why you would bother with creating or being part of any group on facebook.  But there are actually some pretty great uses for this tool.  For example you may have kids and love spamming your entire facebook community with their photos, even though most people really don’t give a SHIT about your kids or anyone else’s. Except, of course, for your family! They love your kids because there is some sort of genetic code thing that dictates it must be so.  You can create a family group and when you next go to post an entire album of the first time your kid learnt to paint with its own poo, you can choose to share it ONLY with your family group, instead of a few hundred people who would probably be pretty grossed out.

It’s also great for any little interest groups you may have – like bands, study groups or even the local swingers club.  These are people you are more than likely connected with on facebook and would get real benefit from being able to share photos, documents, videos, events and thoughts with in the channel.

Lastly, LIVE GROUP CHAT.  Dude, that is amazing. I miss the days of group chat back when you could do it on mIRC and ICQ (wait, could you do it there?) or MSN? To be honest I can’t remember whether you could because obviously these channels are DEAD TO ME now, but I know you could somewhere and it was awesome.

3.       Add any members you would like to be part of the group – note that you can only add people who are your facebook friends AND they will automatically be added without their approval – so if you are not sure they would want to be involved it might be best to ask them first. 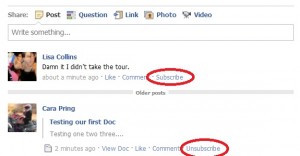 Facebook groups have copped a bit of slack since they launched, most notably for the fact you are automatically added to the group without consent if one of your facebook friends adds you, and the fact you may get prolific inbox spam if the group is very large and active (note that groups are limited to 250 people though and you can choose what notifications you want to receive, including the ability to subscribe and unsubscribe to certain posts – see left).  However I actually think they are a great idea and have given myself a huge slap in the face for not getting off my arse and using them before.  Of course I did just create one (as you saw from the pics above) for a little digital innovation group I am part of, and I’m already excited at the possibilities.  And now I am not a shit social media specialist! hurrah!

Now go forth and getting your group on.

PS. I found this pretty cool article which answers some more questions you may have about groups.  I find it’s much easier just to capitalise on others’ hard work rather than put my own in.  Enjoy! 5 questions about groups – http://news.yahoo.com/s/ytech_gadg/ytech_gadg_tc3871