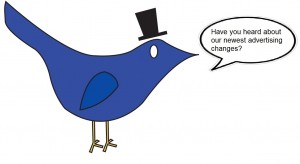 So far it has to be said that we’ve all been fairly lucky when it comes to suffering through advertisements on the Western world’s two biggest social networks – Facebook and Twitter. To begin with Zuckers and the Twitter team created their networks completely ad-free (otherwise known as the good days), but quickly realised when their users started to amass in the millions that this altruistic approach wasn’t doing so well for their bank balances.

Of course given the vast amount of personal information they had stored on their servers they probably made a few billion from selling it to relevant government organisations and terrorist cells, but obviously this wasn’t enough. Why not introduce some form of advertising? Brilliant idea! So in came Facebook plain advertising and then poll ads, event ads, video ads, premium ads, sampling ads, like ads… and everyone’s FAVOURITE Sponsored Stories.

By this stage Twitter was freaking out because they needed to make more money too! So in came Promoted Accounts, Promoted Trends and Promoted Tweets. The twitter team could sleep easy as their bank accounts grew ever-larger (but unfortunately nowhere near as large as Zuckers’).

And as these initiatives were rolled-out across the networks, a collective groan could be heard by social media users the world around. Advertising? But these networks were meant to be user-generated content… it’s where we can control the conversations with other people who we choose to connect with. (we all said). We wouldn’t want a walking billboard to come to a party and sit around drinking with us, so we don’t want one interrupting these social interactions either. For all our misgivings, once the various ad formats were rolled out it didn’t take all THAT long to get used to them. After all, they weren’t nearly as disruptive as television or radio ads, because they just sat quietly to the side and didn’t stop you from finding out who was now in a relationship with who and what activities your ex had been up to over the past few days.

BUT the bad thing about money is that the more you make the more you want. It doesn’t make that much sense really, but it’s just the way it goes. As a result the respective revenue-hungry teams are already cooking up new ways to make the advertising on their channels more ‘effective’ (ie. more disruptive) in order to charge and make more money. What are the new advertising developments we have to look forward to?

Twitter: Promoted tweets will no longer sit nicely outside your twitter stream, where you are free to ignore them to your heart’s content.  Instead, you will now see them appear in your main flow of tweets, whether they came from an account you follow or not. Twitter may also be considering some sort of Cudo-style daily deal as well as potentially adding a “QuickBar” to the homepage, similar to the one they trialled in the mobile app that so spectacularly failed.

Facebook: Not to be outdone in the annoying ad space, the Facebook team are trialling a new homepage design where the navigation bar and advertisements will be visible no matter how far you scroll down your newsfeed. That way each advertisement will potentially get higher click through rates (as they will not be avoidable).

To be quite honest most of us can deal with these changes fairly easily – one or two ‘promoted tweets’ a day wouldn’t make a huge difference to many people’s Twitter streams given it’s typically full of irrelevant crap anyway. Similarly the Facebook ads, though always visible, will still remain to the side of the main newsfeed (and to have the nav bar always visible would probably be quite handy).

There’s no question though that this will not be the last of the changes these networks will implement in a quest for more advertising dollars.  Once the outcry dies down from this latest round we will be faced with new changes, and then more after that. The question is – at what point will it start to ruin the whole experience?

When will it get to the same level as those ridiculous pop-out banners on news sites? Banners up the top, bottom and right were bad enough, but when I’m trying to read about 3,000 people dying in an earthquake I’m not really in the mood for some forced video of a car driving around picturesque mountain ranges being thrown in my face. It only took these sites a couple of years to get to this point, so the question remains how long do we have until advertising ruins our social experience too?

Facebook and Twitter have been the golden children of the social networking world for so long (and arguably are responsible for starting the whole revolution), and it’s hard to believe anything could stand in their way- not even Google. However if there’s anything that can, it will be their own greedy quest for more money from advertisers. So how long will it be before all these advertising ‘upgrades’ destroy our favourite networks?

I for one have no idea, but I do have a funny feeling it won’t be that far away.