Everyone loves to engage in a bit of whingeing here and there, and my family and friends would (with relish) tell you I’m a serial offender. However one thing I haven’t been complaining about is the new Facebook Timeline, because quite frankly it’s awesome and way better than the old profile. If it wasn’t, I would definitely have complained about it at least 10,000,000 times by now. But I haven’t, which proves that it is better. Here are another eight reasons.  I probably should have thought of another two to make it a nice even 10 but I’m too lazy.

1.       It’s easy to use.  Facebook has always (well, since I’ve joined) been pretty easy to use and fairly intuitive. Nothing has changed here, except I would argue it’s gotten even easier to control your content and share important life events. Privacy is more clear and it’s easier to choose what is displayed for the world (or just your friends) on your timeline.

2.       More relevant content. The Timeline update has focused on your bigger more important events, photos, connections and updates. Facebook has chosen what it believes to be the most important and interesting content and featured this. But you are welcome to change it if you see fit. It now doesn’t display the tiny things like “Jane Doe commented on John Smith’s status” or “Jane Doe liked The Social Skinny” (though admittedly that is a life-changing event).  And even better, it consolidates a bunch of things too. Like instead of having 50 separate instances of “Jane Doe became friends with John Smith”, it shows one box with the people you became friends with that month/year. This is the same with the places you visited during that period. Nice and handy and simple.

3.       Ultra customisable. You choose what you want people to see much more easily than previously, and you can even choose to feature the big stories or updates. Get rid of the little inconsequential stuff completely.  Even better you can still find all the little stuff I your activity log, so it’s not deleted for good, but just not visible to everyone.  You can also choose two photos/pictures to represent you now! Hurrah! 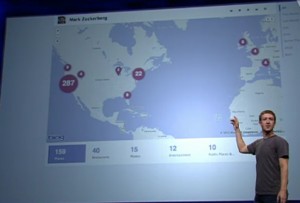 The Map is so freaking awesome even Zuckers can’t keep his hands off.

4.       The Map. This is my favourite feature. It’s just so awesome. You or any of your friends can now click on your map to see all the places you have been… ever! (well that have been depicted in your Facebook life). You can then click on these places and see all the check-ins, photos and statuses that were associated with it. It’s seriously THE BEST.

5.       Memory lane. Don’t you ever enjoy flicking through old photo albums at home reminiscing about the good old days when you didn’t hate all your friends and you still had all your hair? Now you can do the equivalent with Facebook. Once upon a time it was way too hard to go back very far in your Facebook history so nobody bothered to do so. Old statuses and wall posts were lost to the digisphere for ever…. Until now. It’s so easy to go back and see all the great times right back til the moment you joined Facebook. Endless hours of fun. Or embarrassment. Or depression.

6.       It’s so visual. No one likes big blocks of text. Fact. The last Facebook was kinda visual but this one is way way way visual! It’s so pretty with lots of pretty pictures. Yay.

7.       Better privacy. People are having a big hissy fit that it’s completely stalkerific and more easily allows people to go through your history and learn every little thing about you. This may be true but consider this: anyone who cares that much was most likely going to spend the time mining your Facebook history anyway – and they would have been able to find out a hell of a lot more with the last profile format. How many people’s timelines have you gone and clicked on 2008 to see what they were up to then? No one? That is what I thought. No one but you or weird creepy stalkers or potential boyfriends cares… and those people would have spent the effort to find it anyway. This way you don’t have to spend the time yourself clicking ‘see more’ a thousand times to go back to remove all those posts between you and your ex-boyfriend or those incriminating shots of the office Christmas party. Win.

8.       Past events. Seriously love this ability. Haven’t you ever wished you could add some photos of something that happened months or years ago that you either didn’t have Facebook at the time to do or were just too lazy? You can now add something to your Timeline that happened in the past, and it will be put there, in the right place. I like.

So in conclusion I say this: GET OVER IT. The timeline is awesome and it’s here to stay. So start creating some life events, featuring some nice photos and tweaking your cover pic.

OR tell me why you don’t like it, and maybe I can begin to understand what the fuss is about.